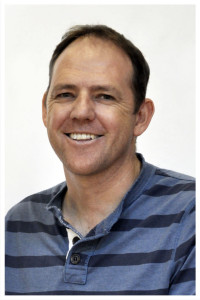 Ray, a Gautenger by birth, and a Capetonian by time and choice (and good rugby!), had to move back to the Free State (after a previous curacy of 3 years in the late 90’s) for what he considers the most blessed period of his life: Here he ‘married up’ to his wife, Roxy, and after almost 8 years of marriage they have 3 lively bouncy, beautiful, biological boys (Gabriel, Samuel and Ezra), and a whole non-biological family of believers they are privileged to serve the Lord with here in Bloemfontein. After entertaining brief thoughts of joining the police force after matric, Ray studied instead at George Whitefield College in the Cape for three years and entered full time ministry. Ray has been the rector of St James Church for 10 years. Ray enjoys a good wrestle with his boys (while he can keep up!), loves watching crime series with his wife, enjoys throwing himself around a squash court, and is an aspirant guitarist (He has a guitar which needs playing!)