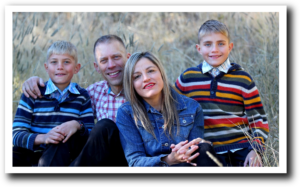 My name is Tim. I am the husband of one wife, father of two boys, owner of two Boxer dogs, employee of two kittens and the guardian of six hens and one chick. I have been married to Marankie for 13 years. Cornel (twelve) and Dennis (ten) are our sons. My pet’s names are classified.
For a decade or more I have been working as a primary school teacher. Prior to that, I was a church-based children’s worker in the city of Manchester and town of Ipswich in the U.K. Most recently, I have been working with Eduplus Independent Primary School, in Langenhoven Park, doing a job that I love. But, now it’s time for a change. Come January and I’ll be stepping into Michele’s shoes (thankfully they don’t have high-heels) to work as the new Families’ Minister at St James.
So how come I’ve ended up in South Africa and why Bloemfontein? This is a question that I am frequently asked. The long and the short of it is that over a period of many years myself and my family have had a desire to engage in cross-cultural mission. (Mine and Marankie’s marriage has been a steep learning-curve in support of this endeavour since she originally hails from South Africa, having lived in Bloemfontein for most of her life.) The dream started to become a reality back in 2013 when I enrolled at All Nations Christian College, Herfordshire, England. I completed three years of training for the mission-field learning that ‘missions exist where worship doesn’t’. Originally, we had intended to work with a mission agency based in Cape Town. For various reasons, this didn’t work out. So, we decided to see what the Lord might have instore for us here in the Free State. Two years later I am about to start working with St James to spearhead reaching out to children and families that don’t yet know the Gospel and to spur on those, within our fellowship, that do.
I look forward to working with many of you over the years to come in the knowledge that, as the old African proverb says, ‘It takes a village to raise a child’.